Today, we have prepared portrait drawing tutorials for you from the famous Japanese artist Yoshi on how to draw portraits. Practice and you can draw a realistic portrait in just a couple of minutes with simple practical advice on how to achieve similarities, in what technique to draw, how to direct lighting, how to draw nose, mouth, eyes, ears, how to maintain proportions, and what are the features of the image of men and women below.

There are two types of portraits: a formal portrait, where a person is depicted in a position that dictates his type of activity, and where great importance is attached to composition, environment, and often symbolic attributes.

And an informal portrait, where a person is depicted in an arbitrary, natural pose, for example, performing some routine work in a familiar environment. This spectacular modern way of depicting people appeared thanks to instant photography and requires high skill and good taste from the artist. It is important not to scatter the viewer’s attention and remember that the face (mainly the eyes) should be in focus. But to make the portrait more expressive, try to draw not only the head but also the shoulders or body to the waist, as well as hands that are as attractive as the face, if they are beautiful in shape or play an important role in the composition.

The image of women, as well as a study of their character, cannot do without solving aesthetic issues. You should choose a free, arbitrary position if the model is young, and more strict, calm if the model is mature. Avoid unnatural, overly theatrical poses. In many cases, it is worth drawing a woman to her full height, since clothing and background play an important role in reflecting the personality of the model in the drawing.

Portrait of a man

A male portrait is usually more formal. It reflects the generally accepted image of a man, which is associated not only with his physical qualities but also with his position in society. Sometimes the side lighting, giving beautiful contrasts, helps to highlight the features and shapes of the male face. A relaxed body position and facial expression are beneficial for a young man, while mature men are best portrayed in a restrained, stately pose. 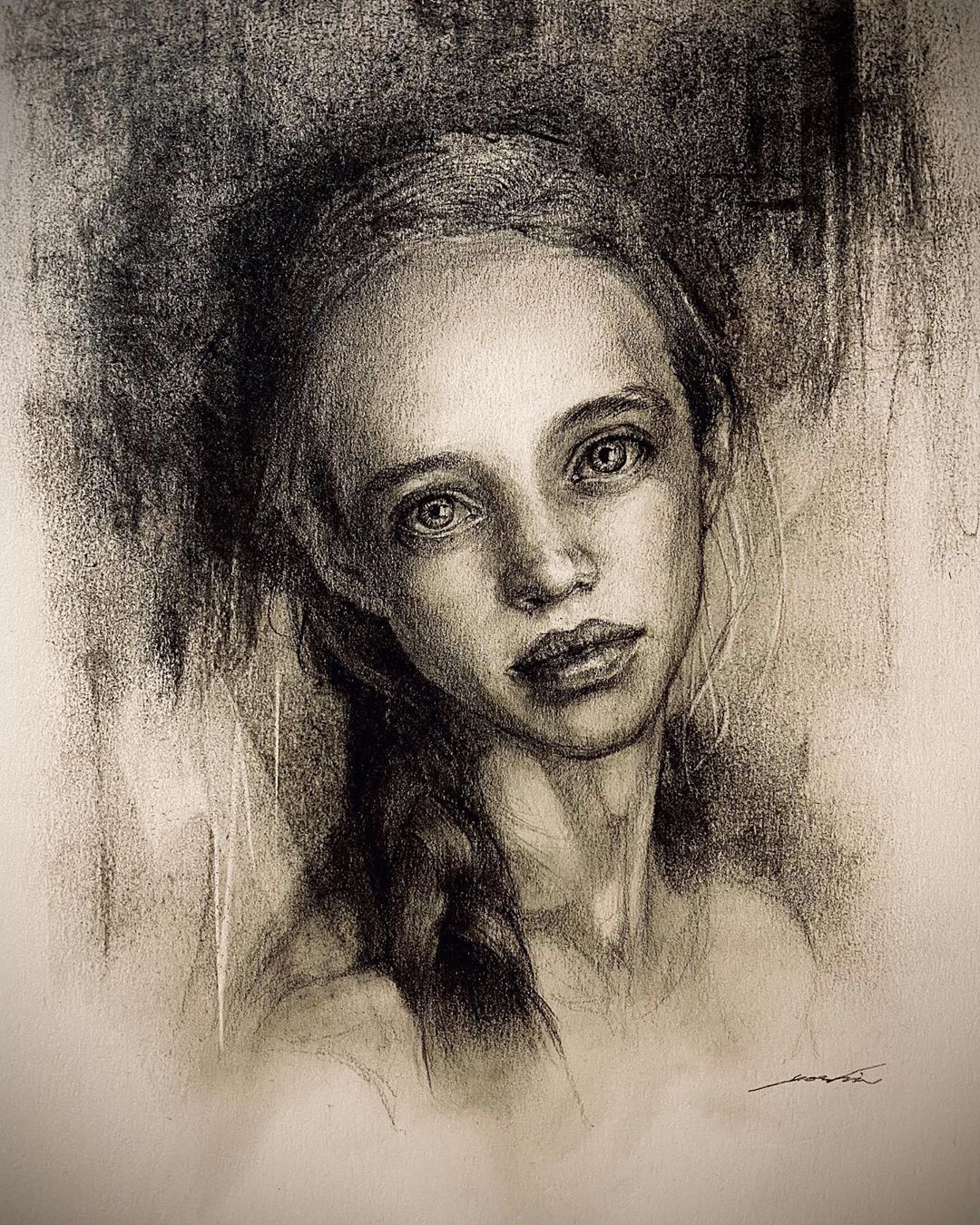 Lighting should be slightly diffused, come from one source (from a window or a lamp) and be located a little higher and to the side of the model. Such lighting reveals facial features, but so softly that no shadows form under the nose and mouth and around the eyes. For this reason, bright artificial lighting (for example, from a searchlight) and direct sunlight should be avoided: they emit even the smallest wrinkles and adversely affect the quality of work.

How to achieve similarity

It is important to convey not only physical similarities but also psychological ones. To achieve physical similarity, it is necessary to carefully consider the shape of the head (and draw from general to particular) and accurately calculate the proportions of the face as a whole and the details of the face (eyes, nose, mouth and so on). To achieve psychological similarity, it is important to talk to the model, try to understand its nature, preferences, habits and observe the environment in which a person lives and works.

Of course, this is not always possible, but it can come in handy to determine the most suitable posture and decide which character traits should be emphasized or placed in the spotlight.

The most important thing in the portrait genre is to outline in general terms the individual characteristics of the model’s head and only then carefully study the details and how they relate to each other.

When drawing the head, you need to make sure that its proportions, that is, the relative sizes of the components (eyes, ears, nose, mouth – we will consider them later), are transferred correctly and accurately. When drawing a portrait, it is important to pay close attention to the general structure of the head and determine its main characteristics, because in many respects the degree of similarity of the drawing with the original depends on it.

Detailed reproduction of details is not enough: if the general appearance of the head is inaccurate, almost always the result will be only distant, unsatisfactory similarities.

A square grid that is known from the school bench is useful in training. A grid is applied to the image to be enlarged (drawing or photograph). The same number of squares, but enlarged, need to be transferred to the surface for larger drawing. After that, you can easily transfer strokes to the desired cell, observing the proportions.

Once you carefully study the general structure of the head, you can go on to analyze the features of the details of the face: nose, mouth, eyes, and ears. It makes sense to learn to recognize the basic morphological, that is, the structural characteristics of all elements of the face since it is precisely the exact reproduction of individual features that allows you to achieve close similarities.